It’s been a while – but there’s a perfectly acceptable excuse to my absence. Birthday parties, afterwork drinks, a girls trip to Frankfurt and a surprising visit from Spain. What a great way to slowly settle back into London!

So, even though I have plenty of things to share on travel and getting closer to 30, I decided to make my return with one foodie discovery in London that I’ve fallen head over heels for – Sushisamba. Those of you from the States might already have heard of the concept – a creative blend of Japan, Brazil and Peru all under one roof.

However, there’s something that makes Sushisamba in London special:

The restaurant is set in the 38th floor of Heron Tower (finished in 2011), which at 230m is currently the tallest skyscraper in the City and the 3rd tallest in Greater London (after the Shard and One Canada Square). The see-through elevator takes only a few seconds until the 38th floor (nothing for the faint-hearted!). Being in the heart of the financial district gives this height an entire different meaning – from here, you can see how the city stretches over the surface and it´s easier to appreciate the heights of other skyscrapers around the area. For instance, on the other side of Heron Tower is 30th St Mary Axe (the first shot of this building was actually taken from the restaurant back in April – when I had only come in for a coffee, ignorant to the food heaven next-door).

So, what’s a Japanese – Peruvian – Brazilian fusion like, anyway? 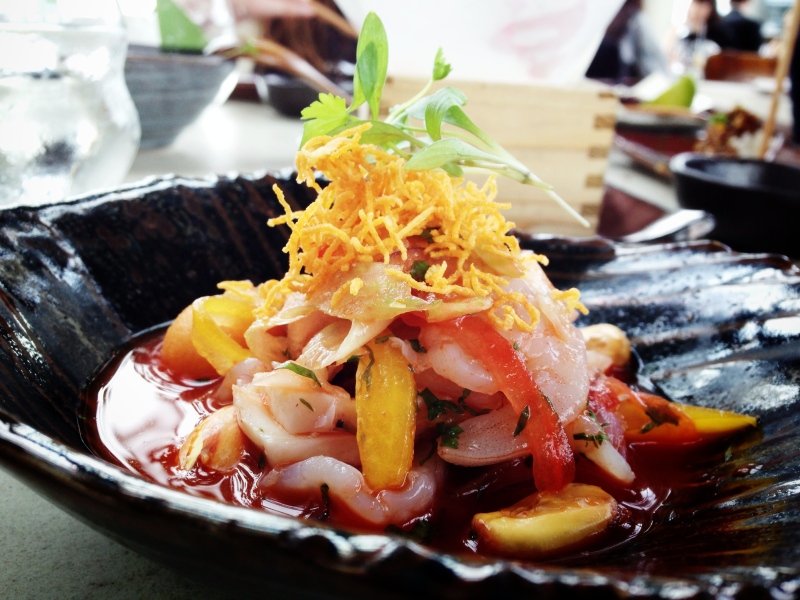 The fusion doesn’t come as a surprise – after all, Brazil is home to the largest Japanese population outside Japan, ever since early XIX century. Actually, I recently read that sushi is one of the most popular dishes in Brazil – it’s so popular, that it’s often even served at Churrascarias (with a Brazilian twist). Nobu offers a famous blend of peruvian japanese dishes, while others like Sushinho focus on the brazilian – japanese connection. Either way, the result is light, refreshing and delicate – and incredibly beautiful.

7 thoughts on “Sushisamba – The Best of 3 Worlds”